Air Circulators vs Traditional Fans [WHICH One is BETTER?]

By Ben •  Updated:   March 4, 2022
Cooling Fans
Affiliate disclosure: When you buy a product via our links, we sometimes earn a referral fee. Learn more

When you first see them, you might think that there’s no difference between air circulators and traditional fans.

I’ve been using both for several years, so all the benefits I’ll list are from a real-user experience.

They both have certain benefits, but one does have an advantage over the other.

You’ll learn when to choose one over another and in which situations they’ll work better.

The Biggest Difference Between Air Circulation And Fan

The main difference is that air circulators are built in a way to move the air throughout the whole room – it constantly pushes and moves the air.

A lot of people think traditional fans work by the same concept, but they don’t. A fan will blow cold air in front of you.

Yes, it might cool the smaller room a bit, but you will only feel the real “soft wind effect” if you’re sitting right in front of it.

It’s because they have 360-degree oscillation. It helps to maintain the same temperature in the room by eliminating all the cold or hot spots.

Both of them are designed to move air throughout the room.

What people and sellers won’t tell you is that traditional fans add some heat to the room because of their motor.

I’m a big fan of air circulators, so I recommend everyone to choose one.

You can check out the best-voted Vornado Air Circulator below 👇 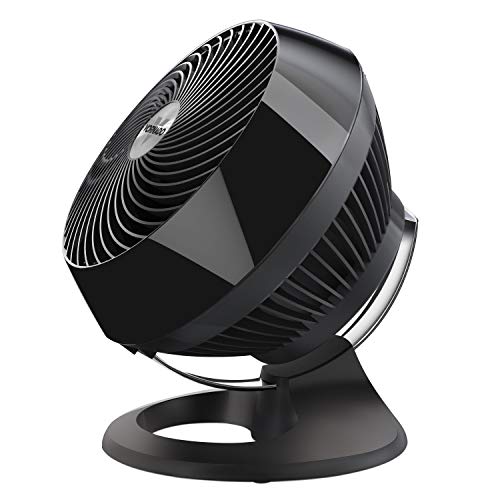 Vornado 660 Large Whole Room Air Circulator Fan
$99.99
Buy Now on Amazon
We earn a commission if you click this link and make a purchase at no additional cost to you.

On average, air circulators use anywhere around 30 watts up to 50 watts while they’re running. It depends on the speed settings you choose.

It’s safe to say that air circulators cost around $5 per month if you run them for a couple of hours every day.

Of course, some models might have higher or lower wattage usage.

Other traditional fans such as pedestal and tower fans spend about the same amount – dollar up or so.

It all depends on the power of the fan and how often you use it.

You should read the usual costs of different types of fans.

Where Are They Being Used?

It’s usual for air circulators to be used industrially such as workspaces, offices, or other interiors.

I’ve seen a lot of sales and marketing agencies use circulating fans as the temperature increases productivity and creativity for all employees.

Large companies use air circulators because of their performance and how quickly they can cool the whole room.

You can use it to your advantage at your home.

Personally, I’m a huge fan of air circulators because I can quickly move them to different rooms.

Talking about traditional fans, you have to be careful when choosing. You want a powerful fan that can cool your whole room while having no problem fitting in a small place.

I recommend you to read an in-depth guide about choosing the right fan.

Also, I have to mention that traditional fans work better on the outside.

You shouldn’t use an air circulator while sitting on your porch or having a large family gathering on the outside.

Air Circulator’s Benefits – Why You Should Buy One?

On average, air circulators will produce a noise of 40dB which is equal to quiet library sounds.

It’s no wonder a lot of offices are using it. It’s one of the reasons why workspaces use it instead of traditional fans.

The only time they can get up to 60dB is then you’re using the turbo(maximum) mode.

It doesn’t take a lot to cool the whole room – even a bigger one.

The “hidden” secret behind this kind of power is 360-degree oscillation. This helps with evenly distributing the air and making the room cooler in less time.

Use It Throughout The Whole Year

You can use air circulators throughout the whole year.

It will help you cool your whole room and prevent sweating in the summer, and help your fingers and body stay warm in the harsh winter.

This is a big advantage among the traditional fans in my opinion.

It’s funny how easy it is to maintain it.

You just need a brush (a vacuum cleaner would help a lot) to clean it once a month.

Another thing to mention is that it doesn’t collect as much dust and dirt as other fans.

There’s no doubt that air circulators are more efficient than traditional fans.

They’re more powerful and yet more efficient – that’s the reason why I absolutely love them.

Often times you won’t need to use an air circulator as much as other types of fans as it can do the job a lot quicker.

It’s up to you to choose what fits your needs, in the meantime – you should go and check out our other articles and learn more about cooling. How To Make Mist Fan In Just 7 Steps [DIY]

I've created dozens of misting fans for myself and my friends, so just follow my simple step-by-step system to have your own misting fan running in no time. Ceiling Fan vs Standing Fan – Which One To Choose [REVIEW]

There are a lot of different types of fans, but the biggest battle is always between ceiling fans and standing fans. I’ve been using both for the past year. I’ll reveal the best five high cfm box fans in a minute, but let’s first talk about what to look for before making a purchase. There are 4 things to consider.